*     #exboyfriendsbelike, “Who is this guy and why is he calling me his ex-boyfriend?”

*     #StopAndFrisk found unconstitutional, #NYPD now to implement #StopAndFist: or as LT Smith said, “Going all Rodney King on their ass.”

*     If you get #RodeoClownObama, then I get #RodeClownJesus! Of course everyone’ll think it’s a hipster and not Jesus.

*     Will you fuckers stop posting videos that make me cry! Sheesh!

*     I’m admittedly a verdant comic, but I think I may be starting to hit puberty, because I just found pubes in my joke.

*     James Bond: Tears of Allah is a well to hide nuclear weapons.
Catholic: Tears of Yahweh are insect excrement (off a tree).

*     Why are there sounds of mining coming from the mine when I know everyone just ran out because of the two ogres?

*     How can I mow the lawn if it keeps raining? Wait.. mowing the lawn is work. Never mind. Keep raining.

*     Remember when hoodie references or wearing a hoodie made you sing, “Mama said knock you out!” I miss those days.

*     IF we make sure we #StopAndFrisk white people, can we start with #MayorBloomberg? He seems suspicious.

*     Anyone know of a black or Hispanic politician who supports #StopAndFrisk? Or is it just crazy white people?

*     Does the Trivago commercial dude freak anyone else out? Is it just because he’s not wearing a belt?

*     #MichelleObama made a Hip-Hop video for kids. In the meantime, FOX News Headquarters implodes from attempts to deny racism.

*     Paul McCartney & Stevie Wonder now have to remake the song to “Chocolate & Ivory.”

My friend Matt Dillahunty (‏@Matt_Dillahunty) responded, “The LORD moves in mysterious ways. God is shooting at you and intentionally missing! (mostly) #ThatIsPureLove”

So I replied, “Funny, the attack in question is 2 Great White sharks: Jesus really fucking hates this dude!

*     Advertising irony of the day. Not FTB’s fault – they can’t control the ads.

*     I’d like to remind that annoying GEICO Hump Day Camel that camel tastes amazing when cooked on an open fire.

*     I have this weird feeling that my UPS package is not coming today.

*     The world is just crying out for the Al Qaeda Comedy Tour! ‫#‏اقتراحك_لتطوير_اﻹعلام_الجهاد‬

*     Homegrown Comedy had a photo contest to win two tickets to their 8/16 show. Below is the pic and my three entries: 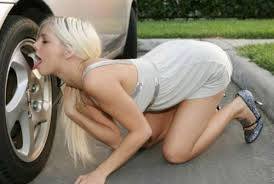 In an attempt to recover a drop in their stock, Hot Wheels (TM) tries something new.

Svetlana shows off the new runway model fad diet. She says, “It tastes gross at first, but after a while you get used to brake dust.”

*     Twitter keeps trying to get me to follow Alyssa Milano. Nah, I quit stalking her when I hit puberty.