I spent the second part of my week dealing with a conservative radio talk show host who didn’t like a satire piece I wrote for the Rocket Wrangler about his racist activities (link below). I mean, I already suspected he was a douchebag for his “one man protest” of “Police Lives Matter” and his ignorance of what exactly white privilege is and how it’s NOT an insult. But then he finds out that I’m on the dais for an upcoming comedy charity event and threatens to not support the show or advertise for it unless I’m removed. Now, I no longer suspected he was a douchebag, but knew he was a douchebag. You can also imagine how disappointed I was that the charity event chose to not stand up to his bullying. Here is a man who talks shit about people every single day on his show, but let one satire piece call him out, and suddenly he’s a whiny beotch (and a hypocritical asshole). Of course he’ll never understand the irony of an anti-big government conservative out there protesting in favor of the police. His brain’s too small to process that kind of thinking. The best part about all of this is that he wanted me to come on his show and debate him. Really? You didn’t want me on the charity event but you want me on your show? Two words: fuck you. Why on earth would I come on your show? You’re clearly an ignorant racist conservative asshole who puts yourself above others (you know, demanding your way because your little feelings were hurt when someone decided to make fun of your asinine stunt) and demanding to get your way or you’re taking your ball and going home. You’re a childish asshole and there’s no way I would ever come on your show. I’ve been on Hannity a few times, Megan Kelly (I even made her throw a temper tantrum on live TV), and many others. But you? Nope. Fuck your show. 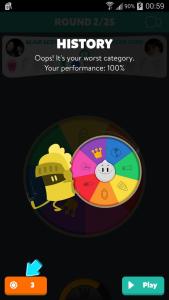 I do believe this app is confused.