So Brexit has all the Texit folks mumbling and groaning again. Sigh…

Okay secessionists. See, here’s the thing. Let’s pretend that you actually seceded from the UNITED States of America (you know, UNITED, as in a whole country, which means secession is the most un-American thing you can actually do). What would happen?

If Texas succeeded in seceding, it would collapse and become a third-world country within a year or two. A few years after failing Texans would be begging to become part of the UNITED States again.

Why would Texas fail?

2. NASA would be gone. Say goodbye to the Johnson Space Center and all the businesses and jobs that support it. Say goodbye to all the engineers and scientists who will move to a new NASA location (either one already existing or a new one that will be built). Thousands of jobs gone, hundreds of homes vacated, significant loss of tax revenue.

3. The Coast Guard and all Homeland Security assets would be gone. Say goodbye to the Coast Guard in Corpus Christi, El Paso, Galveston, Houston, Port Arthur, and South Padre Island. If you need rescuing, hopefully the local county police have a boat or helicopter to come get you. Or maybe the UNITED States Coast Guard based in Louisiana will feel bad for you and come get you. Maybe. After all, they do rescue Cuban refugees. But you’d be deported back to Texas after processing.

4. The US Marshal Service, FBI, DEA, and other federal law enforcement agencies would leave Texas. No point in protecting a place that’s not in the UNITED States of America. Thousands of jobs gone. Maybe a lot of them will get lucky and moved to other states? But those that move no longer provide tax revenue to the newly named Texanistan.

5. All federal funding for education, roads, maintenance, disaster relief, etc would be gone. No more FEMA funds for San Marcos or Houston or Austin when they flood. No more federal disaster dollars after a hurricane, tornado, or seven-year drought. You think Texas roads are bad now? Wait until Texanistan has to foot 100% of the bill instead of 30-50% of it. And you think Texas school suck now? Man, wait until Texanistan celebrates the end of the Dept of Education by gutting science. I mean, who needs science since NASA no longer is in Texanistan?

6. A significant chunk of businesses would leave because they would need access to the American market – not just Texas. This would specifically affect any companies with a UNITED States government contract (mostly defense). All those companies would be forced to move outside of Texas in order to maintain their contracts with the federal government. And since there will be a massive brain drain once secession happens, a lot of tech companies will leave as well so that they can find educated employees.

7. Texanistan would no longer be privy or part to any of the treaties and agreements the United States has with bordering countries and countries around the world. That means every Texan would have to get a passport to travel to Oklahoma, Louisiana, etc. Texas would have to negotiate its own trade agreements, but until then it would be hit with every major pre-trade agreement tariff and tax. Have fun draining the coffer just to get Chinese goods in that are now suddenly two times more expensive because of extra tariffs.

8. Speaking of those borders, say goodbye to the US Border Patrol, you know those federal officers who “keep the Mexicans out?” Yeah, well, at least Texanistan has plenty of gun-toting “Minute men” (I’m pretty sure that’s a sexual reference) to take care of those ferners.

9. Say goodbye to all those customs agents at the border and shipyards as well.

10. Speaking of customs agents, what about all those shipyards that have federal contracts? I guess that work will go to Louisiana and Alabama (they could use the extra money). Maybe the cruise lines will still come in after Texanistan spends five years negotiating a new contract? After all, Texanistan would be a foreign country, so there are international laws they’d have to follow in negotiating a new porting contract with the Texanistan government.

11. Radar coverage and flood warnings and tornado warnings? You need those? Yeah, too bad. The NATIONAL Weather Service just left as well. Maybe Bobby Joe with his rain gauge on his mud truck can take care of the weather forecasting for you. Then everyone can “Heehaw” as the tornado siren.

I could go on and on, but I think you get the gist. Now I’m sure there’s a lot of secessionists reading this list and yelling “Hell yeah!” for every departure I’ve mentioned. That’s all fine and dandy until they no longer get their Social Security, Medicaid, or food stamps or disaster relief.

Be careful what you wish for. You just may regret it. 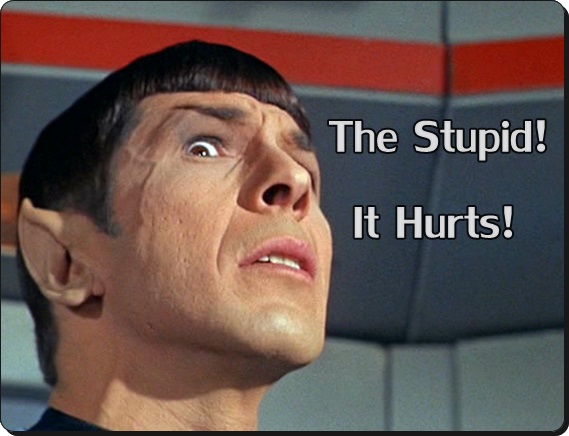 In the grocery store: amazing ass in yoga pants in front of me. Turns the corner… it’s a dude. Vomit cleanup in aisle 6, please!

Greenpeace is stupid sometimes. I have fond memories of hosing them down from a Navy ship.

Damn, did I really just spend the last 1.5 hours editing my GameFly queue? Yep… guess I did.

Grocery store is packed. Must be a storm coming. Idiots.

Sometimes poor Japanese translations make perfect sense when the sign is hung in the right place. 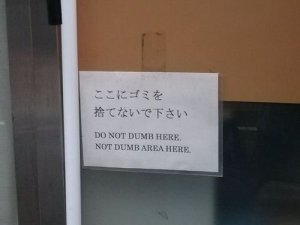 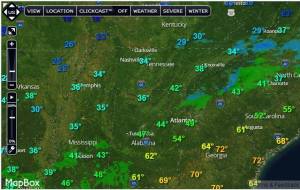 Just noticed that if you take almost all anti-government conspiracies and replace government with GOP, it sounds legit.

If the terrorist bomb teacher accidentally blows up his class, does the virgins he get match the number of fingers he has left?

Def Leppard’s “Snowmageddon” is on the Hysteria album, right? 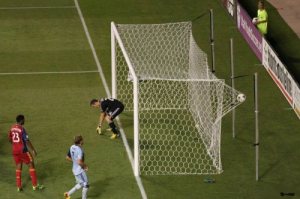 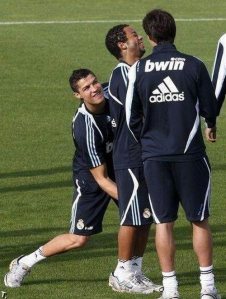 The Good Ship Lollipop struck an iceberg and sank.

“Yeah, but are you gettin’ it? Snowmageddon it! Ooh, really gettin’ it? – Yes, Snowmaggedon it!” – Deaf Snowleopard 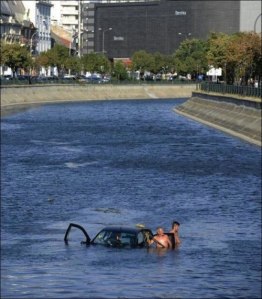 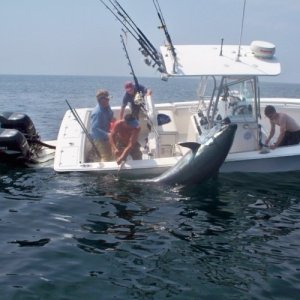 OMFSM! The Rugrats predicted the Fleshlight! 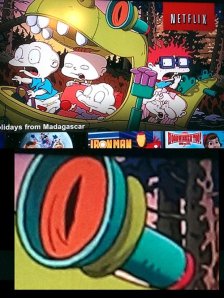 In places where insurance isn’t required (or Libertarians are in charge). 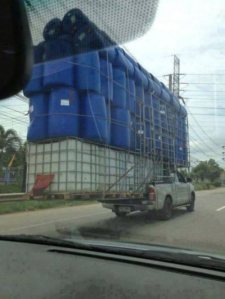 Every time you walk on snow… you’re just like Jesus!

If I had known my Chromecast had arrived in the mail today, I would have trudged out in the snow earlier.

With all the ice and snow out there, it took me a little bit of extra time to get to my office this morning. (a joke for those people who know what I do and where I do it) 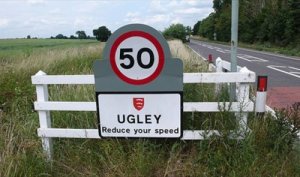 My ex-wife just said, “I’m so glad I have you as an ex and not some douche who will screw me over.” I gotz cred!

I’m 42-years-old and I still cut the crust off my sandwiches. That’s so (5-year-)Old School!

I’m convinced Valentine’s Day was invented by a single person so they’d have an excuse to rail against couples for one day. 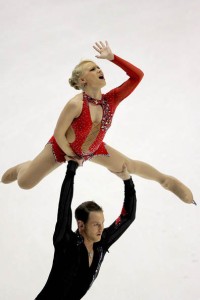 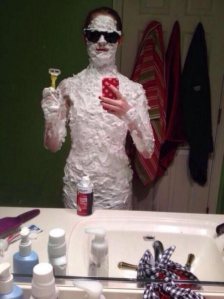 When did Hardee’s become the fast food version of Cracker Barrel? Next thing you know… Hardees Funeral Home.

My sexting chat name is RU486.

Demand for apartments in Florida is so high that people will kill for them!

With so many shootings lately, maybe it’s time to bring bath salts back.

I always find it entertaining to see everyone in their Sunday best walking around in Kroger.

I like confusing church-goers on Sunday: I drive around in my ATHE1ST mobile while blaring Echoing Green on my radio.

Apparently the #GoldCupFinal is a tie between two girls.

If insanity is doing the same thing repeatedly with the same results, what does that say about the 40th vote to kill Obamacare?

#Smurfs2, wait, there was a Smurfs1? How did I not hear about what had to be the greatest film of the decade?

I was feeling lonely, so I Googled pressure cookers, backpacks, nails, and explosives so the FBI would visit me.

In Soviet Russia, stripper girlfriend is Zoya, the female agent who strip searches you.

1 in 5 women now choose to be childfree. That’s good news to single men on dating sites.

The Post Office wants to start delivering booze through the mail. That’ll raise the bar a bit!

Bars are dumping Stoli in the street to protest Russia. In other news, homeless people are lining the gutters.

The Smithsonian wants to display Trayvon’s hoodie. Probably in the Air & Space Museum to show off bullet aerodynamics.

Taiwanese lawmakers exchanged punches over a proposed nuclear power plant: showing US Republicans what an actual “nuclear option” is.

Genetic “Adam & Eve” identified. Still no word on the snake.

I say “bin Laden” in most of my phone conversations at least once: doing my part to keep jobs at the NSA.