BWAHAHA (Blair’s Week Attempts at Haha’s) 1/11 – 1/17: So this week a kind and loving Christian decided to key my car. Now, while I can’t prove it 100% that it was a Christian, I can with practical certainty say it wasn’t a Buddhist, Hindu, Wiccan, or Atheist. There were three cars in my driveway and mine was the only car targeted and they tried to X out my license plate, which says ATHE1ST. Now, maybe I’m just wrongheaded here, but is vandalizing my car really the way to bring me to god? I mean, if you want me to believe in your god, then vandalizing my car is the way to do it, right? No, wait, that actually reinforces my view that believers are delusional. I mean, if your god is so all powerful, then why does he need you to key my car when he can just strike me dead at any time he wants? Then again… kinda hard to kill me when he doesn’t exist.

I think we should deregulate Coal some more. I mean, deregulation clearly worked in West Virginia!

I made an illegal lane change and ran a red light right in front of a police officer. He did nothing. Decided against the illegal U-Turn.

My thermostat says it’s 73 in the house. I think it’s lying.

Possible causes: 1) projectile vomiting, 2) exploding soda, 3) murder, or 4) Gallagher performance. Or perhaps, Gallagher, while performing in the car, caused a soda can to explode, which hit a passenger in the face, killing him, and the other passengers were then so grossed out they projectile vomited everywhere. The driver then murdered Gallagher. 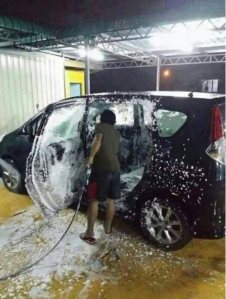 My spicy Thai peanut sauce has been sitting in ghost peppers for 96 hours now. HOLY FUCK!!! Call the Fire Department!

Yeah, but are you gettin’ it? Llamageddon it! Ooh, really gettin’ it? Yes, Lamaggedon it!