Welcome to my week attempts at haha’s: 8/3 – 8/9. This used to be called “This Week On Twitter” (TWOT) and then this last week I realized that I post on Facebook, do shows, etc., and all of that should really be included. So no more TWOT. Now it’s BWAHAHA (and the pun on “week,” (you know, as in weak) just in case your stupid ass didn’t get it).

I’m going cosmic bowling. How did I get talked into something that will likely be on YouTube tomorrow.

Watch me almost fall on my ass while bowling (YouTube)! They stopped video-taping me, but the next frame I fell flat on my back.

I like to go dancing at Charismatic churches, because no one there notices I’m a bad dancer.

Who is writing the #TrueBlood dialog now? The writers for Telemundo soap operas?

Sat. we played Predictive Cards Against Humanity: lay your white card down before the black card is read. Funny shit.

Heading to Muscle Beach at Venice to work out my new Muscle Car on the boardwalk. #TooSoon 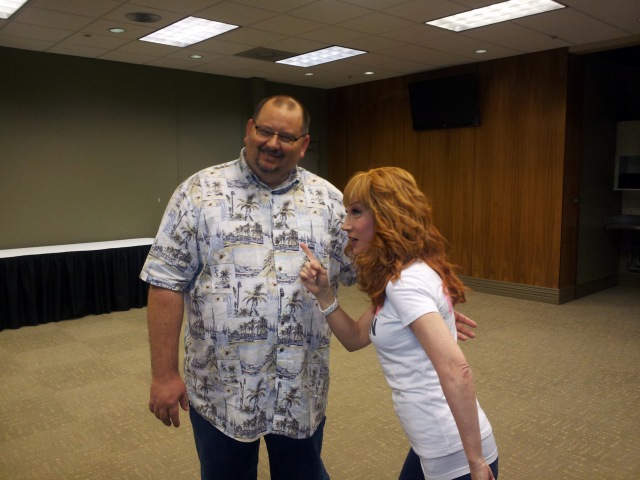 Introducing some random fat guy!
Kathy Griffin at the VBC.

Nothing says fuck the third world like urinal televisions!

While waiting for Kathy Griffin, Jeph noticed people 2 rows ahead are looking at my FB pictures and says, “Dude, you’re famous!”

The only legal #StopAndFrisk should be by strippers dressed as cops. And even then only if you ask. #StopTheInsanity

The insects are throwing a party in my yard because all the rain washed away my Traizicide that I put down.

“Live Your Life Like No One’s Watching” may be a great motto, but I’m pretty sure I’d be arrested for indecent exposure.

Oh good grief! It’s obviously something on the camera screen!